Donald Trump doesn’t much like the media. According to Trump, coverage of the Donald has long been “really dishonest,” “very, very dishonest,” or just plain “dishonest“—and that goes “especially” for “political reporters.”

But in the five weeks since Trump has gone from citizen billionaire business mogul to a leading Republican presidential candidate, the press has done him a favor by recording his boasts, bluster and diatribes with interest. Trump’s disparaging comments about Mexicans and Arizona Sen. John McCain earned him coverage, as did the decision of a handful of companies to severe business ties.

Trump’s surge in media attention has been matched by his position in the polls, where he is now second only to Florida Gov. Jeb Bush, according to an the Real Clear Politics aggregate of polls.

So how much attention is Trump actually getting? Based on a review of 10 media outlets’ coverage in the last six weeks, Trump has been mentioned in more articles than all leading Republican presidential candidates except Bush. Among the media outlets measured here, the Washington Post has mentioned Trump more than any other, publishing 593 articles that included Trump over the six weeks. (TIME hasn’t been ignoring the former reality host, publishing 104 articles that mentioned Trump between June 8 and July 19.) 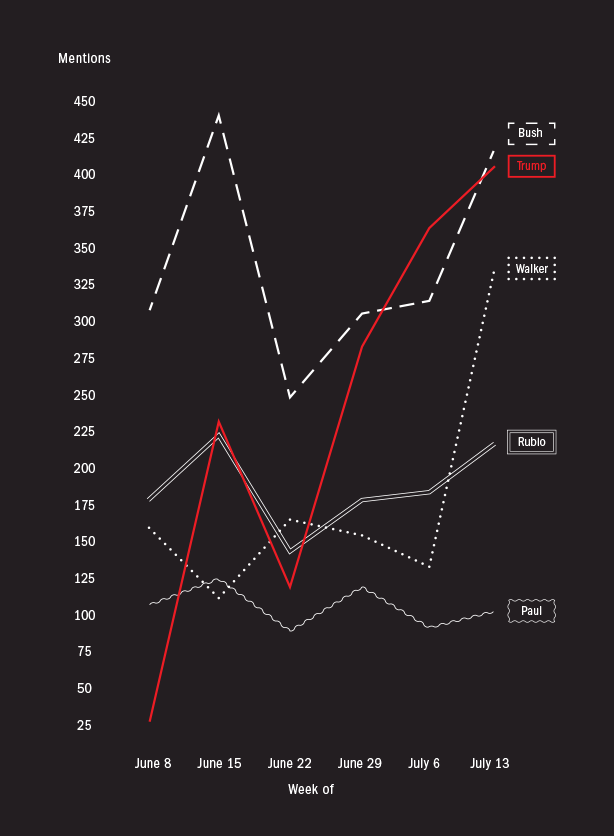